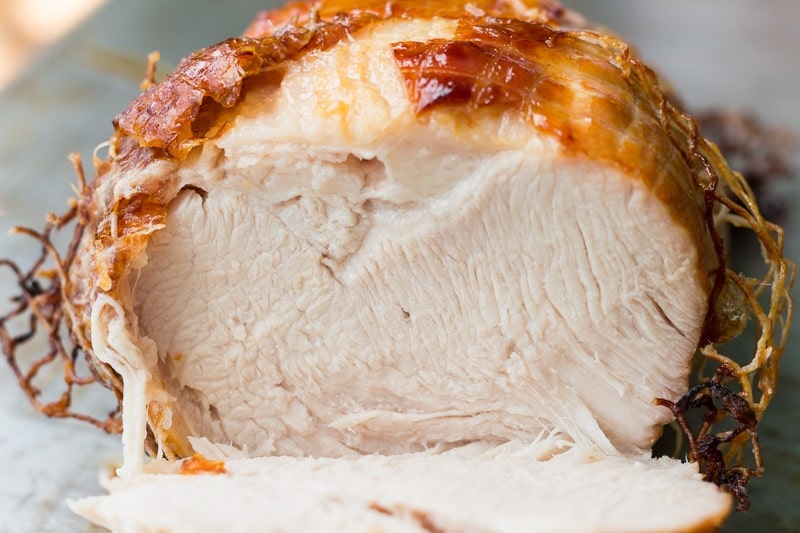 Cooking a turkey breast is a convenient way to enjoy a festive meal without the hassle of dealing with a whole turkey. As a bonus, the meat will cook faster, too. Here’s our ultimate guide on how to tell if turkey breast is done cooking.

Turkey breast is finished cooking when it reaches an internal temperature of 165 degrees Fahrenheit. It’s fine to take it off the heat at 160 degrees—the meat will finish cooking as it rests. There’s no way to be sure when the turkey will reach this point, but you can make a ballpark estimate based on the weight and cooking temperature.

Unlike turkey legs, which can withstand temperatures of 170 and even higher, turkey breast should only cook to 165 degrees.

Past this temperature, the meat becomes unpleasantly dry. In fact, there’s a good chance that when people claim not to like turkey, it’s because they’ve only ever eaten it when it was overcooked.

There’s a fine line to walk here, however. According to the USDA, poultry products like turkey aren’t considered safe to consume unless they’ve achieved an internal temp of 165. So you want to make sure the meat cooks to that point, but not more than a degree or two past it.

The best way to do this is to take the turkey off the heat when the breast is showing an internal temperature of 160 degrees. Then set it aside to rest, loosely tented with foil, for 10 to 15 minutes. The temperature will go up a few degrees due to carryover cooking.

How To Tell if Turkey Breast is Done Cooking

As every seasoned pitmaster knows, there’s only one fail-safe method for ensuring that meat has cooked to the correct temperature. You’ll need to test the temp using a reliable and well-calibrated instant-read thermometer.

Without a thermometer, you’d have to rely on appearance alone. That’s not a reliable technique, as we’ll discuss in the next section. That’s why a meat thermometer is a chef’s best friend.

To test the internal temp of the turkey breast, insert the probe into the thickest portion of the cut. If it’s a bone-in breast, take care not to touch the bone with the tip of the probe, or the number won’t be accurate.

Wait a few seconds for the readout to stabilize. When it hits the 160-degree mark and holds there, you can safely take the turkey breast off the heat. Otherwise, let it continue cooking for a while longer.

How To Tell if Turkey Breast is Done Without Thermometer

What if you don’t have a meat thermometer handy? Is there any way to tell if the turkey is done?

There are a few guidelines you can use, but unfortunately, they aren’t reliable enough to recommend. There’s a good chance you’ll have to wait until the turkey breast is overcooked, just to avoid the risk of food poisoning.

Whenever you cook a large cut of meat, you should estimate about how long the process will take, based on the factors we’ll discuss later on. This will give you a general idea of when the turkey might be done, but it’s by no means foolproof.

Read More:   Top 10 can i use my smoker in the rain That Easy To Do

Fully cooked turkey breast also has a different appearance than the raw product. When the turkey is cooked, the meat loses its pink, translucent quality and turns white and opaque. The skin turns from beige to a deep golden brown shade, and usually crisps up.

That said, you can’t rely on appearance when it comes to poultry, especially if you’re using the smoker. Here’s why.

Turkey can be white and opaque throughout and still be underdone according to USDA standards. And sometimes, the meat retains a pinkish hue even when it’s fully cooked. This is a common occurrence with smoked turkey and chicken.

You’ll know for sure whether the meat was at the proper temp if you bite into it and it’s chalky and dry, or if you or anyone else gets sick as a result of consuming undercooked poultry. For obvious reasons, neither of these situations represents an ideal outcome.

In short, it’s never a good idea to cook a poultry product—or any type of meat, really—without a thermometer on hand.

How Long Does it Take to Cook a Turkey Breast?

There are two questions you need to ask yourself before making the calculations for your estimate. First, how much does the turkey breast weigh? And second, what cooking temperature do you plan to use?

Turkey breast typically weighs between 4 and 8 pounds, although there may be larger ones available. For obvious reasons, smaller specimens will cook through in less time. If you want to speed things along, consider buying two small ones and cooking them together.

Bear in mind, too, that boneless cuts might reach the target temperature sooner than you expect. Since the bone contributes both flavor and moisture to the cooked turkey, though, we suggest selecting these whenever they’re available.

If you’re preparing a 6-pound turkey breast in a smoker that’s set to 275 degrees, estimate that it will be done in 2 to 2-1/2 hours. When you set the cooking temperature to 325, the meat could finish cooking in just 1-1/2 hours.

Remember that your estimate is just an educated guess. There’s a chance that the meat will be ready exactly when you expect it to be, but it’s just as likely that it will cook faster or slower. There are a number of circumstances that could affect the cooking time.

Our suggestion would be to test the internal temperature of the turkey breast at your estimated halfway point. That way, you’ll gain a better idea of how much longer the meat might need to reach the serving temp.

How To Calibrate a Meat Thermometer

Before you begin, make sure you have a small adjustable wrench or set of pliers handy. Fortunately, some thermometers come with a miniature wrench built right into the protective sleeve. Check yours to see if this is the case.

Your first step is to boil a pot of water. It needs to be deep enough to submerge the tip of the thermometer probe without touching the bottom of the pot. While the water is coming to a boil, fill a glass or small bowl with ice, then top it off with cold water.

When the water is boiling, dip the thermometer probe into the pot. Take a look at the readout. It should display 212 degrees Fahrenheit or 100 degrees Celsius. If it doesn’t, the readout is inaccurate and needs to be adjusted.

To change the numbers, find the small nut on the reverse side of the thermometer, right where the face is connected to the probe. Adjust the nut using the wrench or pliers. Be careful—you shouldn’t need to move the nut too far.

Your next step is to submerge the probe in the ice water. At this point, the readout should be 32 degrees Fahrenheit or 0 degrees Celsius. If the numbers are inaccurate, make another adjustment to the nut.

Repeat this process as needed until the thermometer provides an accurate readout in both the boiling water and the ice water. At this point, the unit is well-calibrated and ready for action.

If you know your thermometer is always showing a number that’s 10 degrees higher or lower than the correct one, you can do the math accordingly. Since we don’t trust inaccurate thermometers in any case, though, we wouldn’t recommend this approach.

As tempting as it can be to rely on timing and appearance alone when cooking turkey breast, doing so can result in disappointment or even disaster.

When you cook pork butt or beef brisket, you can often tell when the meat is done as soon as you insert the probe, as it will have a butter-like consistency. A rack of pork ribs will crack and bend in the middle when it’s reached the right temperature.

There are no similar tests for turkey breast. If you don’t have a meat thermometer, now is the time to buy one.

Best of luck, and happy grilling!

How To Tell if Turkey Breast is Done Cooking: Pro Tips

How to tell if a turkey breast is done without thermometer? 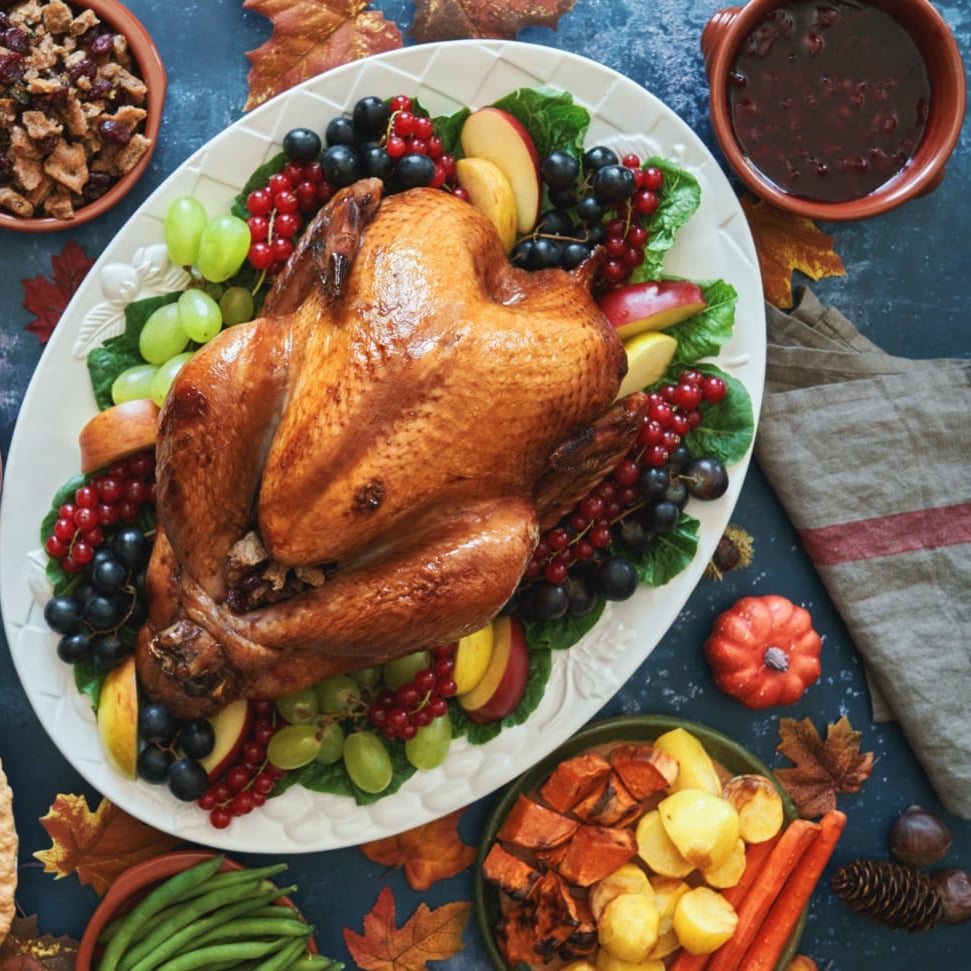 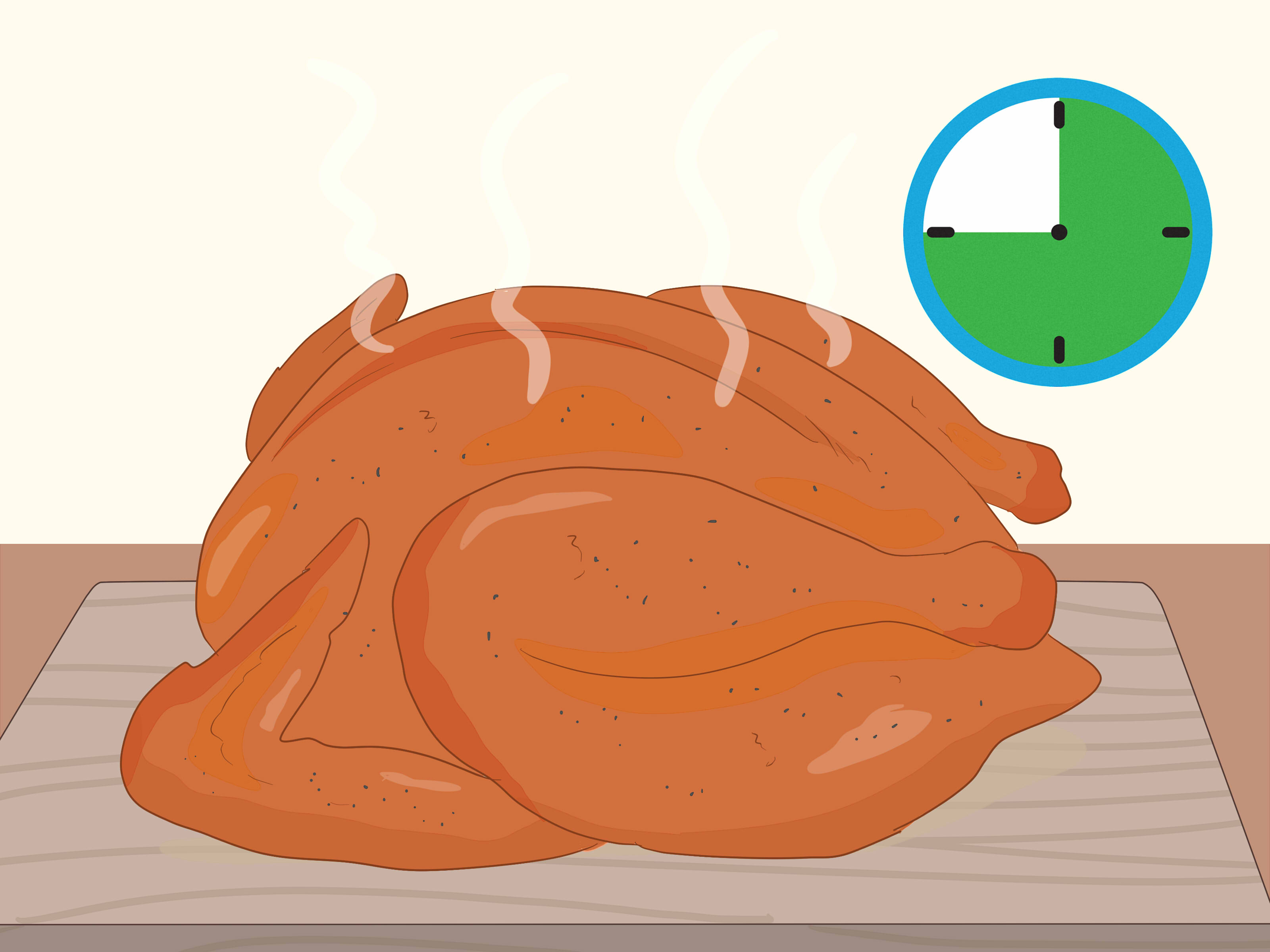 How to Tell if Thanksgiving Turkey Is Done: 8 Steps – wikiHow

How to Tell if Turkey is Cooked | Blue Flame Kitchen

Read More:   Top 10 doritos pork That Easy To Do

If you have questions that need to be answered about the topic how to tell if turkey breast is done without thermometer, then this section may help you solve it.

How do I know when my turkey breast is done?

The turkey is done when it reaches 165°F in the thickest part of the breast meat. Start checking after 1 hour of roasting and continue checking every 10 to 15 minutes until the breast is cooked through. Cover the turkey to prevent over-browning

Is it safe to eat slightly pink turkey?

The best way to be sure a turkey ? or any meat ? is cooked safely and done is to use a meat thermometer. If the temperature of the turkey, as measured in the thigh, has reached 180°F. and is done to family preference, all the meat ? including any that remains pink ? is safe to eat.

Can turkey be pink and still be done?

How do I know when my meat is done without a thermometer?

How long do you cook a turkey breast at 350?

The answer is simple! 20 minutes per pound at 350 degrees Fahrenheit. For example, my turkey breast was 3 pounds, so I roasted it for 60 total minutes at 350F. If you’re ever unsure whether your bird is done, an instant read thermometer really is a lifesaver in these situations.

Can you overcook a turkey breast?

What happens if you eat slightly undercooked turkey?

What Happens If You Eat Undercooked Turkey? Consuming undercooked poultry could lead to salmonella, a type of food poisoning. Symptoms include diarrhea, fever, and abdominal cramping. The illness could be evident as soon as 12 hours later, or it could take up to 3 days to manifest itself.

How do you test a turkey for doneness?

How do you tell if a turkey is fully cooked without thermometer?

To find out if your turkey is done without a thermometer, pierce it with a fork in the mid-thigh muscle, explains Nicole Johnson, the co-director of the Butterball Turkey Talk-Line. “When the juices run clear, and no longer reddish or pink in color, it’s a good indication that your turkey is done.”

Can your phone take your temperature?

Fingerprint Thermometer is a smartphone android app that measures the most accurate temperature rate monitor app for any smartphone.

Can you use your phone as a thermometer?

Heaveen Thermometer is a great app to install on your Android devices, it’s free to use and super easy to install and set up.

Is there an app that can take your temperature without a thermometer?

One reliable app is the iThermonitor, which can be downloaded on either iPhone or Android devices. Using it, you can get a temperature in emergencies and other situations when you don’t have a thermometer.

Can iPhone act as a thermometer?

While your smartphone has temperature sensors, they do not measure the temperature of the room. Instead, these sensors perform a vital function for your phone, preventing damage to your battery and other components from overheating. To measure ambient temperature with your iPhone, you’ll need to use a separate device.